The King's birthday is a national holiday in Cambodia.

The reigning King of Cambodia Norodom Shiamoni was born on May 14, 1953.

The festivities last for three days, from May 13 to May 15.

He spend most of his life outside Cambodia, namely in Czechoslovakia, North Korea, and France.

In 1993, he was appointed as Cambodia's ambassador to UNESCO.

He was previously offered an appointment as the country's ambassador to France, but refused it.

In 2004, King Norodom Sihanouk unexpectedly abdicated from the throne and moved out of the country. 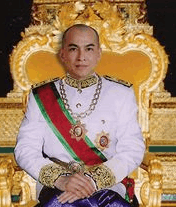